NAF BOMBING: Number of casualties increased as NAF confirmed deaths of civilians in the operation against Boko Haram and ISWAP in the Yobe axis 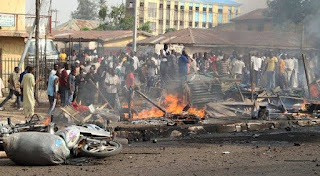 Additional facts have emerged as to what actually led to the bombing of villagers at Garin Buhari, a community in Yobe State, by the fighter jet of the Nigerian Air Force.

PRNigeria reported that a Nigerian Air Force (NAF) attack jet had injured women and children on Wednesday when it targeted suspected fighters of the Islamic State of West Africa Province.

However, credible intelligence sources in the North East theatre command said though the NAF fighter jet’s aggressive bombardments affected some civilians, the vulnerable victims were not actually its target.

One of the sources said: “The attack aircraft was on the trail of some ISWAP elements who infiltrated the villagers, apparently to escape the air onslaught.”

According to the source, ISWAP fighters have in recent times deployed the tactic of dissolving into residents of communities in Borno and Yobe States to flee military bombardments.

“They quickly dissolve into communities so that they can be saved, as they know better than the fear of causing collateral damage will dissuade troops of the military air task force from striking them, alongside the villagers. But this time around, the troops took the painful decision to strike some of the terrorists who were fleeing to join the community members. Hence, the tragic incident occurred yesterday. It was just inevitable,” he added.

READ ALSO; Nigeria Police Force to recruit 10,000 officers as approved by the President

Meanwhile, 22 children were officially confirmed to have sustained various injuries.

Seventeen men and seven women were also affected by the military air raid.

A source said: “Of the 47 persons admitted yesterday at the Geidam Specialist Hospital, 13 have died.”

PRNigeria also learnt from local sources that the incident occurred at about 10am on Wednesday when a military jet sighted suspected ISWAP insurgents riding motorcycles around the community.

Meanwhile, in an official statement, the spokesperson of NAF, Air Commodore Edward Gabkwet, said reports reaching the military command headquarters alleged that some civilians were erroneously killed while others were injured in the operation in Yobe State.

While clearing the air on the operation, Gabkwet said: “Following intelligence on Boko Haram/ISWAP movements along the Kamadougou Yobe River line, an aircraft from the Air Component of Operation Hadin Kai was detailed to respond to the suspected terrorists activities in the area along the Nigeria/Niger border at about 0600hrs on 15 September 2021.

“The aircraft while operating South of Kanama observed suspicious movement consistent with Boko Haram terrorists behaviour whenever a jet aircraft is overhead. Accordingly, the pilot fired some probing shots. It is important to state that the area is well known for continuous Boko Haram /ISWAP activities.

“Unfortunately reports reaching Nigerian Air Force (NAF) Headquarters alleged that some civilians were erroneously killed while others were injured.”