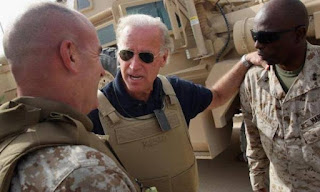 President Joe Biden is embarking on a solemn journey Sunday to honour and mourn the 13 U.S. troops killed in the suicide attack near the Kabul airport as their remains return to U.S. soil from Afghanistan.

Biden was travelling to Dover Air Force Base in Delaware for a “dignified transfer” movement, a military ritual of receiving the remains of fallen troops killed in foreign combat.

The dead ranged in age from 20 to 31, and came from California and Massachusetts and states in between. They include a 20-year-old Marine from Wyoming who had been expecting his first child in three weeks and a 22-year-old Navy corpsman who in his last FaceTime conversation with his mother assured her that he would stay safe because “my guys got me.”

Five were just 20, born not long before the attacks of Sept. 11, 2001, which spurred the United States to invade Afghanistan in order to topple al-Qaeda and dismantle their Taliban hosts who ruled the country.

At their deaths, the 13 young service members were on the ground for the U.S. conclusion to its longest war, assisting a chaotic evacuation of Americans and of Afghans who helped the U.S. war effort and are now fleeing the Taliban after their return to power.

“The 13 service members that we lost were heroes who made the ultimate sacrifice in service of our highest American ideals and while saving the lives of others,” Biden said in a statement Saturday. “Their bravery and selflessness has enabled more than 117,000 people at risk to reach safety thus far.”

Meanwhile, U.S. forces were in the final phase of pulling out of Kabul on Sunday, as Afghanistan’s new Taliban rulers prepared to take control of the airport.

Just over 1,000 civilians remained at the airport to be flown out before the troops finally leave, a Western security official told Reuters.

“We want to ensure that every foreign civilian and those who are at risk are evacuated today. Forces will start flying out once this process is over,” said the official, who is stationed at the airport.

Biden has said he will stick by his deadline to withdraw all U.S. troops from Afghanistan by Tuesday. A U.S. official told Reuters on Saturday that fewer than 4,000 troops remained at the airport.

U.S. and allied forces have mounted a massive two-week effort to ferry foreign nationals and tens of thousands of vulnerable Afghans out of the country.

The airlift — one of the biggest such evacuation operations ever — marked the end of a 20-year Western mission in Afganistan that began when U.S.-led forces ousted a Taliban government that had provided safe haven for the perpetrators of the Sept. 11, 2001 attacks on the United States.

The final chapter came quickly after the United States and the Taliban made a deal to end the foreign involvement. The Western-backed government and Afghan army melted away as Taliban fighters swept across the country and took control of Kabul on Aug. 15.