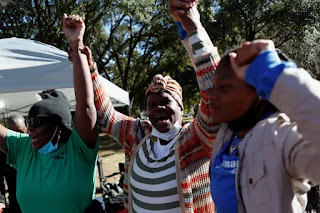 A Georgia jury found three men guilty of the murder of Ahmaud Arbery, whose fatal shooting last year fueled mass protests against racism and vigilante justice in the United States.

His father Gregory McMichael, 65, and neighbor William “Roddie” Bryan, 52, were also convicted on various charges, including murder. The three men, all of whom pleaded not guilty, were charged after pursuing and fatally shooting Arbery as he jogged through the coastal community of Satilla Shores outside of Brunswick in February 2020.

Before pronouncing their verdict on Wednesday, the jury asked to re-view the video Bryan recorded on his cell phone of Travis McMichael firing his pump gun at close range at Arbery. That video became one of the main pieces of evidence delivered during the trial. , the only defendant to take the stand, said he fired his shotgun at Arbery in self-defense.

The jury also asked to hear Greg McMichael’s 911 call shortly before the shooting, telling the 911 operator that “a black man is walking down the street” and repeatedly hearing Arbery yell to be stopped. It came after the defendants got into their trucks and chased Arbery to arrest him, they said, because they believed he was responsible for property crimes that made the neighborhood nervous. 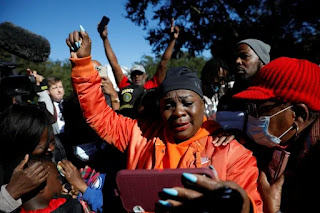 There was no evidence that Arbery had stolen anything on his frequent tours of Satilla Shores. He was killed with nothing in his pockets, not even a cell phone or a wallet. The men face minimum life sentences. decide whether this comes with or without the possibility of parole.

Shihab Rattansi Reporting from outside the courtroom, he found that the jury had made its decision in less than two full days of deliberations. He said the verdict brought Arbery’s family and supporters “a mixture of relief, surprise and joy,” but stressed that the three men were not charged until after video of the murder was exposed.

“As always, we must remember that when Arbrey was originally killed and [when] the police arrived, they accepted these men’s stories,” said Rattansi.

“It wasn’t until the cell phone video came out that the situation changed and charges were brought against these men. How often will there be no cell phone footages? It is this mixture of relief, surprise, and joy realism.