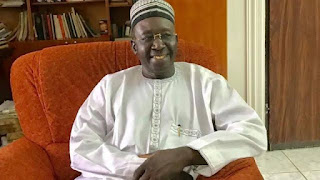 The governor’s felicitation is contained in a statement by his Chief Press Secretary, Mr Olisa Ifeajika, on Monday in Asaba.

He said that Ayu as an astute politician, had etched his name in gold with his outstanding service to the nation in various offices he had occupied.

He commended the new PDP boss for his contributions to the growth and development of the party and democracy in Nigeria.

He said that with Ayu steering the ship, Nigeria would berth at desired shores in 2023.

Okowa recalled that Ayu played a significant role in stabilizing democracy in the country when he served as President of the Senate in the Third Republic and later in various ministerial positions in former President Olusegun Obasanjo’s administration between 1999 and 2007.

According to the governor, Ayu deserves all the accolades as he is set to lead the PDP on a rescue mission to save Nigeria – people, democracy and the economy.

He noted that Ayu’s selfless service to the PDP as well as his many accomplishments in personal and public life “readily come to mind as he celebrates his 69th birthday anniversary”.

“Your Excellency, our incoming National Chairman, you have played significant roles in the growth and development of the nation as a former President of the Senate and we can’t thank you enough for your great achievements”.

Okowa said, “on behalf of my family, the government and people of Delta, I congratulate you as you celebrate your 69th birthday anniversary.

“Over the years, you have devoted yourself to the course of peace and development of our party and our country. For this, we owe you an enduring debt of gratitude.

“It is with pleasure that I and members of our great party in Delta join your family, friends and well-wishers in thanking Almighty God for His continued mercy, protection and provision for you in the past 69 years.

“As you celebrate this day, it is my prayer and that of our members that God will continue to bless you with good health, wisdom and many more years as you set to lead our great party on the rescue mission.”