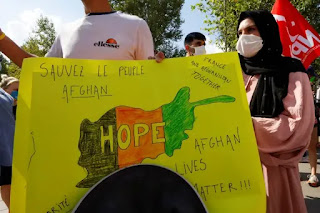 France has carried out an evacuation mission in Afghanistan, taking 258 Afghans as well as 11 French, some 60 Dutch nationals and an unspecified number of people linked to them out of the country, a French foreign ministry spokeswoman said on Friday.

The operation was organised with help from Qatar, a ministry statement said.

Evacuees included Afghans who were at risk, such as journalists and people with links to France, including civilian workers employed by the French army.

Since September 10, at least 110 French people and 396 Afghans have been evacuated from Afghanistan on 10 flights organised with the help of Qatar, the statement added.

The United Nations Development Programme (UNDP) this week described an “alarming” socioeconomic outlook for Afghanistan for the next 13 months.

Afghanistan is struggling with a sharp drop in international development aid after the Taliban seized power in August, and the UNDP has projected that poverty may become nearly universal by mid-2022.