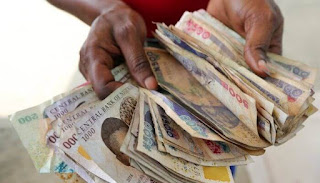 Monday, 31st January 2022: The exchange rate between the naira and the US dollar closed at N415.33/$1 at the Investors and Exporters (I&E) window, where forex is traded officially.
Naira gained against the US dollar on Monday to start the week with a 0.16% appreciation to close at N415.33/$1 compared to N416/$1 recorded as of the close of trading activities on Friday, 28th January 2022. This represents the highest level of the local currency against the US dollar so far in the year 2022.
Similarly, the exchange rate at the Peer-to-Peer (P2P) market depreciated marginally by 0.263% to trade at N571.5/$1 on Tuesday morning compared to N570/$1 in the previous trading day.
Highlights
Forex turnover at the official market improved by 17% to $95.07 million compared to $81.29 million recorded in the previous trading session.
On the other hand, the exchange rate depreciated marginally by 0.263% at the P2P market on Tuesday morning, trading at a minimum of N571.5/$1 compared to N570/$1 recorded on Monday morning.
Naira closed flat at N568/$1 at the parallel market, the same as recorded in the previous trading session. This is according to information obtained from BDC operators interviewed by Nairametrics.
Nigeria’s foreign reserve declined by $31.26 million on Friday to close at $40.12 billion as of 28th January 2022, representing a 0.08% decline compared to $40.15 billion recorded as of 27th January 2022.
Trading at the official NAFEX window
The exchange rate at the Investors and Exporters window closed at N415.33/$1 on Monday, 31st January 2022, which represents a 0.16% appreciation compared to N416/$1 recorded in the previous trading session.
The opening indicative rate closed at N415.1/$1 on Monday, which represents 32 kobo appreciation compared to N415.42/$1 recorded in the previous trading session.
An exchange rate of N444/$1 was the highest rate recorded during intra-day trading before it settled at N415.33/$1, while it sold for as low as N405/$1 during intra-day trading.
Forex turnover at the official window increased marginally by 17% to $95.07 million on Monday, 31st January 2022.
According to data tracked by Nairametrics from FMDQ, forex turnover at the I&E window improved from $81.29 million recorded on Friday 28th January 2022 to $95.07 million on Monday 31st January 2022.
Cryptocurrency watch
The crypto market traded positively on Monday, starting the week with a 1.73% gain to close at $1.72 trillion, indicating a $29.34 billion appreciation for the crypto market capitalisation. In the same vein, the most valuable crypto asset, bitcoin gained 1.26% to close at $38,421.
Also, Ethereum recorded a gain of 3% to close at 2,681, while Solana rallied with a 6.33% gain to close at $99.2075. Tera gained 9.48% on Monday to close at $50.7159048 while Uniswap recorded a 8.52% uptick to trade at $11.72.
Meanwhile, the world largest crypto exchange, Binance has restricted the personal accounts of 281 Nigerian users based on security concerns. The CEO of the exchange noted in a letter to its Nigerian customers that the decision to restrict some personal accounts was to ensure user safety while more than a third of the affected accounts were restricted at the request of international law enforcement.
Crude oil maintains bullish market
The crude oil market maintained a bullish trend into the new week, capitalizing on the stellar upward trajectory recorded in the previous week, where Brent crude hit $90 per barrel. On Monday, the price of Brent Crude gained 1.07% to trade at $91.38 per barrel on the back of inventory draws and the prolonged stand-off between Russia and Ukraine.
West Texas Intermediate also gained 1.74% to trade at $88.33 per barrel, while Natural gas at $4.852 recorded a 4.59% gain as of 10:50pm on Monday.
Nigerian crude products, Brass River and Qua Iboe both gained 0.84% to close at $91.2 per barrel, while Bonny Light dipped 0.98% to close at $90.48 per barrel.
Meanwhile, according to oilprice.com, OPEC failed to meet its production targets in January 2022, as it was only able to lift an additional 210,000 barrels of oil per day for the month. This is contrary to the target of increasing its production by 400,000, thereby creating a shortfall of 190,000 barrels per day.
External reserve
Nigeria’s external reserve dropped by 0.08% on Friday, 28th January 2022 to close at $40.12 billion, which represents a decline of $31.3 million from the $40.15 billion recorded as of the previous day.
The continuous decline in the country’s reserve level can be attributed to the Central Bank’s intervention in the official market in ensuring the stability of the exchange rate and the inability of Nigeria to meet crude oil production quota.
It is worth noting that the nation’s foreign reserve gained $5.99 billion in the month of October, as a result of the $4 billion raised by the federal government from the issuance of Eurobond in the international debt market.
However, in the month of November, Nigeria’s external reserve lost $611.01 million in value as against a gain of $5.99 million recorded in the previous month and a $2.76 million gain in September 2021. In December 2021, the reserve dipped by $66.17 million, while as of 28th January 2022 a total of $400.8 million has been lost year-to-date.
#SOURCE: NAIRAMETRICS