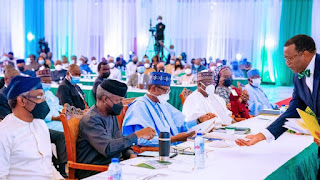 In apparent contradiction of its earlier stance on floating the naira, the Federal Government, yesterday, prevailed on the Central Bank of Nigeria (CBN) to allow the currency to reflect market realities.

According to Vice President, Prof. Yemi Osinbajo, the exchange rate is artificially low, and this is deterring investors from bringing foreign exchange into the country, adding that the current practice, which places the official rate at N410, is not a realistic reflection of the nation’s economic fortunes.

Osinbajo spoke at the opening of a two-day Mid-term Ministerial Performance Review retreat, held at the Presidential Villa, Abuja, yesterday.

The Vice President stated that the dollar scarcity crisis can only be fixed when the market is made to reflect the real status of the economy, arguing that the current demand strategy of the CBN has kept the rate artificially low.

“We can’t get new dollars into the system, where the exchange rate is artificially low, and everyone knows by how much our reserves can grow. So, I’m convinced that we need to rethink the demand management strategy currently being adopted by the CBN, and that is just my view,” he said.

Besides, the African Development Bank (AfDB), yesterday, also gave a bird’s-eye view on the nation’s economy, expressing displeasure over borrowings that are already in excess of $35.5 billion.

The development bank said the debt is rarely the problem in itself, but for its high debt-servicing ratio that is already stifling domestic investments needed to spur faster economic growth.

And to restore the economy on the path of sustainable growth, President of the Bank, Dr. Akinwumi Adesina, advised Nigeria to invest a whopping sum of $15 billion in infrastructure yearly, harness the non-oil potential, reactivate agriculture development initiatives of the last administration, and walk the rope of vaccine sufficiency via local production, among others.

President Muhammadu Buhari, however, said Nigeria remains committed to covering its infrastructural deficit, citing ongoing mega projects that are due for completion in 2023.

Adesina, who was a guest speaker at the Mid-Term Ministerial Performance Review Retreat, said Nigeria has a vulnerable economy that warrants a decisive review of its debt challenges.

Indeed, the VP’s call is coming several months after the Bretton Woods institutions and members of the Organised Private Sector (OPS) told the Federal Government to get rid of the premium paid on the parallel currency market and clear a dollar backlog that has hurt policy credibility.

Both the International Monetary Fund (IMF) in its Article IV report and the World Bank have urged the government to provide a clearer and more predictable foreign exchange management system.

Though the CBN opted for a gradual weakening of the official rate of the naira in an apparent move to allow it to converge with the NAFEX rate, a market-determined rate for investors and exporters, the naira has continued to weaken as demand outweighs supply.