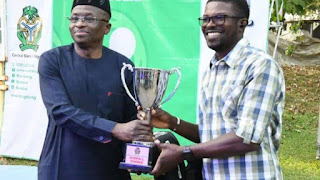 Ezekiel Tiri on Saturday emerged champion of the 2021 CBN Governor’s golf Cup after finishing as the overall best nett winner of the one-day tournament in Abuja.

The News Agency of Nigeria (NAN) reports that playing off handicap 18 and recording a gross score of 87, Tiri returned an overall best nett of 69 to emerge winner of the tournament.

He was closely followed by J. Bello who played off handicap 14 with a gross score of 87 and a best nett of 73.

“First of all I thank God because my winning was by His grace.

“I have been playing for quite a while and actually started golfing in 2009 and currently playing off handicap 18.

“So I would say I am quite experienced in the game, but my success today was a mixture of my skills and a little bit of luck on my side,” an elated Tiri said.

Tiri, who expressed his gratitude to the CBN for a well-organised tournament, however, urged the organisers to do more in terms of sponsoring more golf tournaments in the country.

NAN also reports that in the men’s division one category for handicap 0 to 12, T. Eben Spiff, playing off handicap 10 with a gross score of 82 and 72 nett, emerged as best nett winner in the category.

In the Ladies division one for handicap 0 to 20, Amina Wilfred, playing off handicap 8 with a gross score of 80, finished with a best nett of 72.

In the CBN Staff category, A. Birch finished with a best nett of 70, while A. J. Otu, with 81 nett, and N. Obiora, with 83 nett, finished as first and second runners up respectively.

This year’s edition marks the 14th year anniversary of the tournament, organised in partnership with the IBB International Golf & Country Club, Abuja.