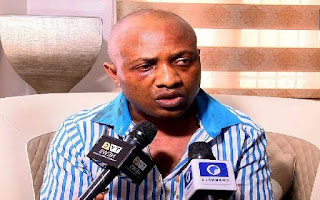 In a recent shocking report, Notorious kidnapper, Chukwudimeme Onwuamadike, popularly known as Evans has denied his identity and also denied that he is a kidnapper.

He now claims that he is a businessman who deals in ornaments and Horlicks.

“I live at Fred Shoboyede Street, Magodo Phase II, Lagos. I am a businessman and I deal in ornaments and Horlicks. My lord, my name is not Evans and I don’t have a nickname,” he said.

He further went on to dispute all kidnapping allegations leveled against him by the Lagos State Government on Tuesday.

He said he had never met his five co-defendants before being captured by the authorities, except on the day they were paraded as members of a kidnapping gang by the police at Area F Police Command in Ikeja, Lagos. The case was postponed until November 5 so that the final written addresses could be adopted.

Evans was led in evidence by his defense counsel, Victor Okpara.

These recent claims by Evans bring to mind his celebrated arrest in 2017.