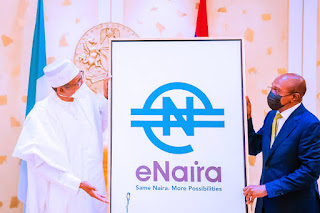 The number of digital channels increased by more than 153 between 2018 and 2020, as the volume increased from 1.3 billion to more than 3.3 billion financial transactions in 2020.

According to the Nigerian News Agency, that disclosure was made by Emefiele while speaking at the 56th Chartered Institute of Bankers of Nigeria (CIBN) Annual Bankers Dinner, Friday evening, at the Federal Palace Hotel, Lagos.

Emefiele said, “In less than 4 weeks since its launch, the eNaira App has been downloaded nearly 600,000 times. An effort is being made to promote faster adoption of eNaira by Nigerians who do not own smartphones.”

Be instrumental in the continued delivery of eNaira and efforts will be made to foster the continued partnership between the CBN and financial industry stakeholders.

The CBN governor noted that building a robust payment system that would provide cheap, efficient and faster means of payment for the majority of Nigerians has always been the focus of the main bank, that we are using digital channels to achieve this goal. ” He said that digital payment channels have also helped support continued business activity during the lockdown.

Emefiele noted that the banking sector’s robust payments system has evolved to meet the needs of households and businesses in Nigeria, with around $ 900 million invested in companies founded and run by Nigerians between 2015 and 2021, which Shows confidence in the country.

Recall that on October 25, 2021, President Muhammadu Buhari, formally launched Nigeria’s digital currency, the eNaira, with an assertion that it is expected to increase Nigeria’s GDP by $29 billion over the next 10 years.

The eNaira’s new payment system which has taken 4 years to crystallise, will drive financial inclusion, serve as a backbone for electronic payment in Nigeria, increase remittance, improve cross border trade and also enable the movement of more people from the informal to the formal sector, hence scaling up the tax base of the country.