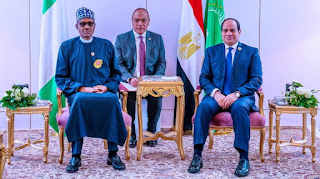 Nigeria has been suffering with the threat of terrorism and extremism that emanated with the non secular perceptions of specific institution of human beings over the last 10 years.

The Boko Haram institution that commenced regionally in Maiduguri, the capital of Borno State, has taken countrywide and global lmeasurement with association with numerous businesses across the Sahel.

Various efforts have been made to stop the developing threat withinside the country through governments in any  level, Civil Society Organisation, Development Partners in addition to non secular bodies and institutions.

One of such groups engaged in operating with Nigeria through the years in preaching non secular moderation, tolerance and higher information amongst us is the Al-Azhar Institute of Cairo, Egypt.

During President Muhammadu Buhari’s visit to Egyptian President Abdul Fattah El-Sisi in February 2016, he advocated for an extensive economic agenda which he noted was challenged by “international terrorism…lots of resources that could be used for development are being diverted to address security issues.”

Since then, the two countries have been engaged in addressing this challenge in order to move forward in their century long relations. Moving on from this, a delegation from the Al-Azhar Institute was in the country early November to propose various means of re-establishing the concept of moderation in religious practices.

Al-Azhar Institution is considered to be the most influential Sunni Islamic academic and preaching institutions world-wide. It had traditionally adopted a moderate understanding and approach to Islamic teachings; and promoted the values of peaceful coexistence and mutual understanding among the three principal Abrahamic religions. A mission of Al-Azhar clerics and experts has been present in Nigeria for decades, offering moderate education teachings in academies and schools across the country. Al-Azhar also grants annual scholarships to Nigerian students at its Headquarters in Egypt.

The visiting delegation explored the possibility of increasing the number of scholarships granted to Nigerian students as well as of expanding its presence through cooperation and association agreements with additional schools and academic institutes in Nigeria.

During the visit of the delegation, the Embassy of Egypt in Abuja also organised an interactive panel discussion on best practices for modernizing religious teachings and education, including in the context of supporting de-radicalization, rehabilitation and reintegration programmes. The panel provided a platform for the visiting delegation to exchange views on this critical topic with Nigerian government functionaries along with the directors of local academies and schools affiliated to Al-Azhar.