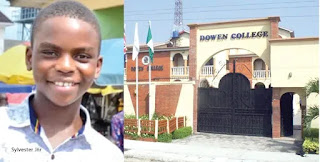 It was when the family celebrated the 12th birthday of the deceased posthumously on Saturday, in which a cake designed as an airplane and a pilot’s uniform were cut in remembrance of his ambition.

News of Sylvester Jnr’s death went viral on Wednesday following a social media post from his cousin, Perry Oromoni, who claimed senior students beat him in his hostel room for having refused to join a sect.

But the school rejected the request, saying the boy complained of leg and hip pain as a result of an injury sustained while playing soccer. The Lagos State government had closed the school indefinitely to ensure a thorough investigation.

Sylvester Snr, in an interview with one of our correspondents on Saturday, said his son would not be buried until justice was served, no matter how long it took. He said, “How can he be buried? I can not bury him until I get justice, until I come to the end of the matter. Even if it will take two or three years, we will move forward. I pray to God to protect us alive.

According to the father, about a hundred people were present at the posthumous birthday party marked by two cakes and a large frame of the late Sylvester in various poses.

The father said: “For his birthday today (Saturday), we cut the cakes, showed his photos and prayed that his soul would rest in peace. We also went to a religious program after cutting the birthday cakes. His sister based in the United States of America asked a friend of her to bake a pilot themed cake for his birthday because she had always wanted to be a pilot.

Sylvester Snr, however, said he would miss his son’s relationships, smiles, love, presence and company. He said: “Whenever he comes on vacation and I’m at home he’s always on me. We eat together, he asks a lot of questions; he’s very curious. He makes his laptop work really well and I don’t know how to do it, so he guides me on how to do it.

Even while celebrating his birthday posthumously on her Instagram page, a Nigerian actress, Tonto Dikeh, said that she “would file flowers and gifts “at the school door. She also posted a video of a man dropping a bouquet of flowers and a teddy bear at the school door and a card with the words” Happy Birthday Captain Sylvester.Rest in peace Champion! You are celebrated. King Tonto.

Meanwhile, Delta State Governor Ifeanyi Okowa has pleaded for the school to be closed indefinitely. Okowa, in a Facebook post on Saturday morning, expressed sadness over the incident and console the family of the deceased.

“During the appeal, I expressed my agreement with the decision of the Lagos State Government to open an investigation into the death of Sylvester, a native of Warri South LGA in Delta State.” As a government that puts the lives of our citizens inside and outside the state first, we are determined to see this through. The case must be investigated, the culprits arrested, punished to have a very powerful deterrent effect on future events.

Likewise, Senate Deputy Speaker Ovie OmoAgege in a statement on Saturday by his media assistant Yomi Odunuga congratulated the Lagos State government on the school’s closure, expressing shock and sadness, facing the death of Sylvester Jnr.

He said: “Closing the school will help children who have returned home to share their experiences with their parents and guardians. They are safe at home where they do not fear immediate retaliation for the revelations.