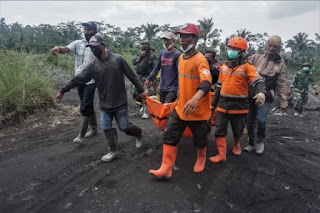 The death toll after Indonesia’s Semeru volcano erupted rose to 13, authorities said as rescuers rescued 10 people from the rubble that night.

The 13 people killed in the eruption have been identified.

Rescuers were still searching along a river in the village of Curah Kobokan for seven residents and sand miners were reported missing.

The volcano, located on Indonesia’s most densely populated island of Java, erupted on Saturday, erupting columns of ash more than 12 kilometers (7.5 miles) into the sky and sending out glowing gas and lava rushing down its slopes. The province of East Java was covered in ash.

The sudden eruption was triggered by a thunderstorm and days of heavy rain, according to Eko Budi Lelono, head of the geological study center. He said the rains eroded and eventually collapsed the lava dome atop the 3,676-meter (12,060-foot) Semeru. The gas and burning lava traveled up to 800 meters (2,624 feet) to a nearby river at least twice on Saturday, he said.

The BNPB has advised people to stay 5 kilometers (3.1 miles) from the mouth of the crater.

Thoriqul Haq, an official from Lumajang district, said that “thick columns of ash plunged several villages into darkness” and a power failure in the area hampered evacuation efforts.

Haq said the debris and lava mixed with the rain formed thick mud that destroyed the main bridge connecting Lumajang and neighboring Malang District, as well as a smaller bridge.

Some residents who fled to a government shelter near the Lumajang district headquarters on Sunday said authorities had not provided them with any information about the volcano’s activities.

“Suddenly everything got dark, the bright afternoon turned into night. And the heat forced us to run to the mosque,” ​​said Fatmah, a resident who fled to Curah Kobokan refuge, about 5 km (3.1 mile) from the crater. “It was a much stronger eruption than in January.

Indonesia, an archipelago of over 270 million people, is prone to earthquakes and volcanic activity as it lies along the Pacific ring of fire, a series of horseshoe-shaped fault lines.