CRYPTO: The statue of Satoshi Nakamoto the inventor of Bitcoin is unveiled in Budapest, Hungary 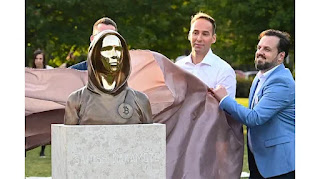 Sculptors and other idea contributors unveil the statue of Satoshi Nakamoto, the mysterious inventor of the virtual currency bitcoin, at the Graphisoft Park in Budapest.

Hungarian bitcoin enthusiasts unveiled a statue in Budapest on Thursday which they say is the first in the world to honour Satoshi Nakamoto, the enigmatic inventor of the virtual currency.

The bronze bust is of a hooded figure, in an allusion to the fact that the true identity of Nakamoto — a pseudonym — is unknown.

The sculpture, erected in a business park alongside a statue of Apple founder Steve Jobs and an installation by Hungarian inventor Erno Rubik, was the brainchild of entrepreneur and bitcoin journalist, Andras Gyorfi.

It was financed by four Hungarian cryptocurrency organisations.

“Back in March, I was researching the connection between digital art and blockchain,” the technology behind bitcoin, Gyorfi told AFP before the unveiling.

“And I thought: ‘why shouldn’t Satoshi have a statue in Budapest?’”, he said.

To reflect the mystery surrounding the true identity of bitcoin’s founder, sculptors Tamas Gilly and Reka Gergely turned the face into a sort of mirror.

“The basic concept of bitcoin is that it belongs to everyone, the people of the internet, that we are all Satoshi,” Gilly told AFP in his workshop just outside Budapest earlier this month.

“So anyone can recognise themselves when looking at the face,” he said.

The founding white paper, published on October 31, 2008, and penned by Nakamoto, included the key goal of processing online payments between two parties without passing via a financial institution.

Since the first block of 50 bitcoins was created in January 2009, around 18.8 million units are currently in circulation.

The cryptocurrency has been on a rollercoaster ride recently, witnessing wild swings in price.

But over the past year, bitcoin has increasingly won support from small and large investors alike, including on Wall Street and from Tesla boss Elon Musk.