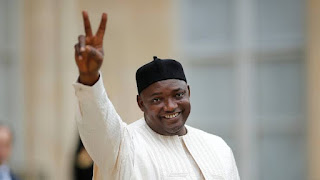 Adama Barrow won a second term in the Gambian presidential election, with thousands of supporters celebrating and opponents contesting the results.

Crowds of Barrow supporters marched through the streets of the capital, Banjul, honking their horns, dancing on a large esplanade. Barrow received a standing ovation when he addressed them with “a great sense of joy and humility” and urged them to respect those who chose their opponents in a “free, fair and transparent election”.

“I will do my best and use all the resources I have available to make The Gambia a better place for all of us,” he said.

Before the full results were announced, three of Barrow’s rivals had rejected the partial results.

“At this point, we reject the results announced so far,” Darboe and two other candidates said in a joint statement earlier.

The elections, the first since former strongman Yahya Jammeh fled into exile in 2017, are seen as crucial for the young West African democracy. Jammeh refused to accept the loss to Barrow in the December 2016 election.

Gambians flocked to the polling cubicles on Saturday to select who might lead their country – the smallest in mainland Africa – for the following 5 years, with the turnout at 87 percent, in keeping with professional results.

Earlier on Sunday, Ernest Bai Koroma, the top of an election remark project from the Economic Community of West African States (ECOWAS), appealed to all of the candidates “to simply accept the final results of the election in top faith”.

The election turned into being intently watched as a take a look at of the democratic transition in The Gambia, in which Jammeh dominated for 22 years after seizing strength in a cold coup in 1994.

He turned into pressured into exile in Equatorial Guinea in January 2017 after Barrow, then a relative unknown, defeated him on the ballot box.

Jammeh misplaced to Barrow withinside the 2016 election however needed to be eliminated through navy intervention from different west African states.