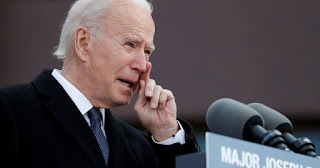 US President Joe Biden has pledged support to states affected by a swarm of devastating tornadoes that demolished homes, levelled businesses and left at least 100 people feared dead.

Describing the tornadoes as likely “one of the largest” storm outbreaks in history, Biden on Saturday approved an emergency disaster declaration for the worst-hit state of Kentucky, where at least 22 people have been confirmed dead.

“It’s a tragedy,” said a shaken Biden. “And we still don’t know how many lives are lost and the full extent of the damage.”

The powerful twisters, which weather forecasters say are unusual in cooler months, destroyed a candle factory in Mayfield, Kentucky, ripped through a nursing home in neighbouring Arkansas, and killed at least six workers at an Amazon warehouse in Illinois. 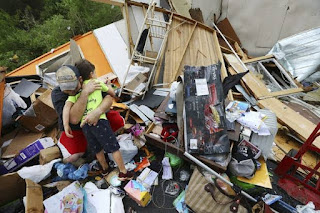 Kentucky Governor Andy Beshear said the collection of tornadoes was the most destructive in the state’s history. He said about 40 workers had been rescued at the candle factory, which had about 110 people inside when it was reduced to a pile of rubble.

It would be a “miracle” to find anyone else alive under the debris, Beshear said.

“The devastation is unlike anything I have seen in my life and I have trouble putting it into words,” Beshear said at a press conference. “It’s very likely going to be over 100 people lost here in Kentucky.” 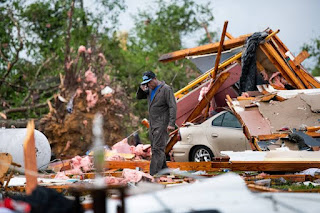 Mayfield Fire Chief Jeremy Creason, whose own station was destroyed, said the candle factory was diminished to a “pile of bent metal and steel and machinery” and that responders had to at times “crawl over casualties to get to live victims”.

One worker had taken to Facebook to plead for help.

“We are trapped, please, y’all, get us some help,” the woman says, her voice quavering, as a co-worker can be heard moaning in the background. “We are at the candle factory in Mayfield. … Please, y’all. Pray for us.”

The woman, Kyanna Parsons-Perez, was trapped under five feet (about 1.5 metres) of debris for at least two hours until rescuers managed to free her.

In an interview with NBC’s Today show, she said it was “absolutely the most terrifying” event she had ever experienced. “I did not think I was going to make it at all.” 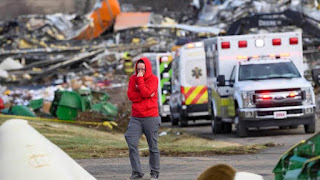 Those reported missing at the candle factory included Janine Denise Johnson Williams, a 50-year-old mother of four whose family members kept vigil at the site Saturday.

“It’s Christmas time and she works at a place that’s making candles for gifts,” her brother Darryl Williams said. “To give up the gift of life to make a gift. We haven’t heard anything, and I’m not presuming anything. But I’m expecting for the worst.”