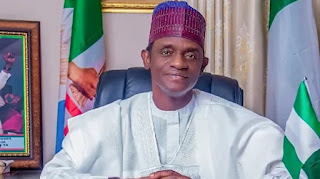 The chairmen are believed to have been produced from congresses monitored by the Independent National Electoral Commission and the APC Caretaker Committee led by the Yobe State Governor, Mai Mala Buni.

In the wake of the intense disagreements generated by the congresses, the party had set up a national reconciliation committee led by a former governor of Nasarawa State, Senator Abdullahi Adamu.

However, top sources within the party had told Saturday PUNCH that the panel failed to deliver its core mandate as none of the factions had reconciled in their respective states while the party’s national convention which will hold on February 26 draws near.

Reacting to the Thursday event in Abuja, the spokesperson for the Kabiru Marafa-led faction of the APC in Zamfara State, Alhaji Bello Maradun, said the inauguration of the Bello Mattawale faction of the party was a fruitless exercise that could worsen the crisis in the party.

Maradun said considering the dispute rocking the party in many states of the federation, the inauguration of the party’s state chairmen produced by “favoured factions may lead to the total collapse or disintegration of the party.”

He said, “The inauguration of the state executive committees without considering the position of aggrieved members is a great mistake that can lead to more serious crises in the party. I am telling you that we are already in court to challenge the legality of Governor Bello Matawalle’s faction of the party and we are waiting for the court’s decision.

“We will however follow all the rules and regulations of our party constitution to make sure that our faction of the party, that is the Senator Kabiru Marafa’s faction, is not sidelined. How can anybody haphazardly inaugurate some favoured factions of the party knowing full well that there are still crises in almost all the states?”

When contacted for comment on the inauguration of the state executive members, the spokesperson for former Governor Abdul Aziz Yari-led faction of the party, Alhaji Ibrahim Magaji, said he would not say anything because they were still in court.

In Benue State where Austin Agada was inaugurated as the APC state chairman, the factional leader, Omale Omale, described the exercise as contemptuous, insisting that the group would pursue its case in court to a logical conclusion. He equally vowed to further institute a case of contempt at the court.

Omale had filed a suit in court via an originating summon and a motion on notice for an interlocutory injunction restraining the APC from swearing in Agada as the state chairman of the party.

However, the court did not rule on the pending motion on notice until Agada was sworn in on Thursday.

Omale said, “Whatever they have done is contemptuous, we are going to take up the matter to the court with all parties to the suit. We are still in court and sure of pursuing the matter to the logical conclusion because the law is clear in this matter that when a party is aware of a tendency of a suit and does any other things to destroy the rest it is contemptuous.”

While dismissing the possibility of leaving the party, Omale said defecting from one party to another was not the right step to correct impunity.

He added, “We will be in the party to correct anomalies, jumping out will not correct the ills. If you do, each time they do, you run away, you are not correcting anything.”

In the same vein, an APC chieftain in Akwa Ibom State and former military governor of Ogun and Rivers states, Group Capt Sam Ewang (retd.), insisted that if the right thing was not done, the party would completely break up in the state.

Ewang, who could not disclose whether his group was inaugurated or not, lamented that some stalwarts of the party were destroying it because of immediate selfish gains.

Asked if his group was recognised at the inauguration, he said, “I don’t know and I have not been told. The issue is that the party as it is in the state is dead if the right thing was not done.”

Speaking with one of our correspondents, the chairman of the APC faction supported by Aregbesola, Rasaq Salinsile, said the group would pursue its appeal and await court decision on the controversies over the ward congress of the party.

Salinsile said, “We are going to appeal the judgment because this case is one that can get to the Supreme Court. So we are going on appeal, by the grace of God, as soon as possible. We are filing our appeal and we will continue with our case.

“We are the real progressives. How can you expect a landlord to leave his house for tenants? Bad tenants for that matter; at times you have good tenants, but these ones are bad tenants. We can’t leave our house for them.”

In a similar vein, the APC faction loyal to the Minister of Information and Culture, Alhaji Lai Mohammed, in Kwara State said the leadership of the faction would decide its next line of action if the case it filed at the High Court, Abuja against the National Caretaker Committee of the party did not end in its favour.

The Publicity Secretary of the faction, Ibrahim Sharafadeen, told one of our correspondents in Ilorin on Friday that the group was however hopeful that the case filed in the court against the caretaker committee would be favourable to it.

He said, “Judiciary is the last hope of people and our case is still before the court. The two parties in the case have made their submission to the court. We are awaiting the judgment but if it turns out otherwise, our leaders will meet and decide on the next line of action.”

Asked if the group would ask its members to defect to another party if it eventually lost out, Ibrahim said the matter had not gone to that level, adding that “we are going to cross the bridge when we get there.”

He noted, “We are still in court and the judge of the Abuja High Court told us that he would inform the counsel when he’s ready to deliver the judgment, we are still waiting for that. If the judgment goes against us, the decision on what to do next will come from our leaders. Right now we are not going to another party.”Victory certain, APC belongs to us – Amosun insists

Meanwhile, a former governor of Ogun State, Senator Ibikunle Amosun, has broken silence on the crisis within the APC in the state, saying “victory is certain.”

Amosun spoke on the heels of the inauguration of Yemi Sanusi backed by Governor Dapo Abiodun as the Chairman of the APC in the state, as against Derin Adebiyi who is his (Amosun’s) candidate.

Contrary to the expectation of some of his loyalists that he would announce his defection, Amosun in a terse statement on Friday said he remained in the APC and appreciated his followers for their steadfastness.

He stated, “To all our party faithful, thank you for your steadfastness. We are APC…..APC…..is ours. The journey continues…..Victory is certain by God’s grace. On APC we stand. Thank you and well done to all of you.”

Also, the Senator Magnus Abe-led faction of the APC in Rivers State said the party only gave the chairmen certificate of returns but did not swear them in.

The chairman of the group, Ben Golden Chioma, on Friday, said they would seek political solutions to address the certificate issue.

Chioma noted that the recognition of his rival, Chief Emeka Beke of the Rotimi Amaechi-led faction as the chairman, did not resolve pending issues in the party.

Chioma said, “I did not hear (that) it was an inauguration. What I heard was that they were given certificates of return for the election. The inauguration will be done by the (national) chairman.

“Let me put it this way. You know that when somebody presupposes that he has won an election, they will give him a certificate. That does not mean that he has been sworn in.

“You also know that having been sworn in does not show that there is peace in the party. We are still where we are, nothing has been resolved, despite the fact that somebody has been given a certificate. We are still within the confines of our actualisation.”

The Minister of State for Labour and Productivity, Festus Keyamo’s camp also maintained that no state chairman had been inaugurated by the leadership of the party.

The Keyamo-led factional Deputy Chairman, Mr Evils Yomanor, told Saturday PUNCH that what happened on Thursday in Abuja was a presentation of certificate of return to the perceived chairmen.

He said, “No state chairman was inaugurated, so in Delta State nobody was sworn in. What the man did was simple; he said that he was not asked to swear in anybody and he did not have the authority to do so and that what they asked him to do was to issue a certificate of return as chairmen-elect.

Yomanor said the suit filed before the court by the faction was still pending, adding that “anything can happen.”

In Enugu, Dr Ben Nwoye, who leads the state’s caretaker committee, said he was still in charge of the day-to-day running of the party.

A former Commissioner for Works, Ugochukwu Agballah, had earlier on Friday while addressing journalists and his supporters who thronged the Akanu Ibiam International Airport, Enugu to welcome him from Abuja, said he had been inaugurated as the state chairman of the party.

But Nwoyo, the former state chairman of the caretaker committee, dismissed Agballah’s claim, insisting that nobody was sworn in Abuja as chairman.

Nwoye, who equally addressed journalists in his house in the evening, said that he was present during the inauguration, insisting that Agballa was only deceiving himself as he is not a member of the party.