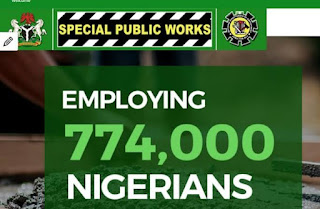 The Federal Government of Nigeria is yet to disburse the sum of N7.3 billion for the remaining beneficiaries of the 774,000 Special Public Works Programme.

The Minister blamed the delay on bank challenges and stated that the FG is committed to fixing the bottlenecks before the end of the year. Keyamo promised that the ministry would ensure that the funds were disbursed before the end of December. The scheme, which was launched in 2019 is expected to pay beneficiaries the sum of N20,000 a month for three months.

“This is so that we have a clear audit instead of us chasing banks all over the place.

“We said the bank should use their local branches to ensure that those 1,000 people selected in that local government area go to those banks within that locality.

“We have made an adjustment in the last few months. We are not attaching a particular bank to a local government again.

“So, no matter what it is, we will achieve 98% success on the programme,” he said.

The Director-General NDE Abubakar Fikpo stated that the agency does not have access to the funds for the beneficiaries. He revealed that the payment scheme for the participants meant all the funds were domiciled at the Central Bank of Nigeria (CBN).

He added that once the details for payment are prepared, they are sent to the Accountant General, not even the CBN.

“It is the Accountant General now that communicates with CBN that upholds these things and then pay. That is the process.

“What we normally send to the accountant general are names of participants, their account numbers, BVN, bank details and the amount.

“It is the accountant general that instructs CBN and then they effect the payment which was why sometimes, we experience failed payment,” he stated.