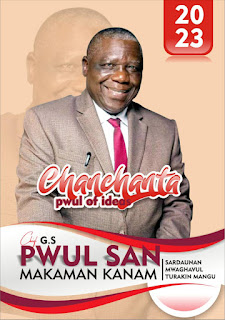 1 CHIEF AMB G S PWUL IS FAIR AND OBJECTIVE
A good political leader does not take what is similar to his views as facts and base his decisions on that. He uses reliable and unfiltered information to make judgments and to come up with resolutions. In other words, he stands above his own believes to observe events objectively while the general public fails to do so. In addition, he does not suffer from a self serving bias.
2. PWUL IS MOVING ABOVE HIMSELF AND SERVING THE SOCIETY.A good leader stands above any specific religious or political views of his own and is independent of any attachment to a specific agenda. His personal beliefs become his private matters and he learns to leave them out the door once he steps into a leadership role. In other words, his belief expands so that it includes everyone’s beliefs.
3.PWUL IS NOT SEEKING FAME AND ATTENTION.A good leader has been able to move above and beyond any egoistic and primitive need for power, attention, or establishing his personal agendas and works with the intention of good-for-all.
4. PWUL IS NOT INTO HIDING THE TRUTH FOR THE SAKE OF LOOKING GOOD.A good leader says it as it is even if it feels uncomfortable for many to hear it.Chief Amb G.S Pwul(SAN).is not a people pleaser in a sense that he would say anything to please others even if that means manipulating or misguiding the public. It takes a lot of courage to do this and a good leader has that courage.
5. PWUL IS FOCUSED ON SPECIFIC, ACHIEVABLE, AND MEASURABLE GOALS AND DEMANDS OUTCOMES.A good leader is focused and does not get distracted. His goals, whether small or large, are reasonable and achievable and are directed towards the long term results not quick and temporary fixes that may backfire.
6. PWUL ENCOURAGES PEOPLE TO BE ACCOUNTABLE FOR THEIR ACTIONS.A good leader helps people understand that they are accountable for their society and its outcome and teaches them to make compromises and responsible choices. He does not support a sense of self-serving entitlement that has gone too far and is counter-productive for the society as a whole .
7.PWUL DOES NOT PAY ATTENTION TO BEING POLITICALLY CORRECT BUT ETHICALLY SO.A good leader understands that in order for the whole society to be a functional and healthy one, some adjustments need to be made and people need to learn to give some in order to gain some.
8. PWUL DOES NOT MAKE  IDEALISTIC PROMISES BUT REALISTIC ONES A good leader makes a sustainable promise and is a man of his words.G S Pwul is a man of his words,is honest even if it does not get aporoval.people know where they are standing with an authentic leader. He does not hide bad news just because it is uncomfortable to the public’s ear.
9. PWUL THINK NATIONALLY AND ACTS LOCALLY.He realizes that in order for us to live prosperity in Plateau as a powerful and blessed State, reasonable steps need to be taken to make sure others achieve the same goals. He is aware that with power comes responsibility and that now more than ever, through technology, we are becoming more and more inner related, Nationally.
10. PWUL IS GENEROUS TO EVERYBODY As a (SAN)He works according to the Constitution,and makes sure everything that happens should be the best one and everybody has his own.
Thanks for coming out as our next Governor of Plateau State come 2023 by the special grace of God!in God we trust.
PLATEAU STATE 2023 CHANCHANTA.
Signed:
CHIEF AMB G.S PWUL (SAN) MEDIA TEAM